Dan Barlow refers to an article I wrote once on naming CLOS slot accessors, so I had better respond. Dan notes that choosing the name of a slot accessor or generic function is somewhat commiting because the name is used more globally than in other languages like e.g., Perl where a "slot name" is quite local. Xach responds that if you don't like a name, you can always change it later. I basically agree with this, but I want to point out that in large programs it may be difficult with text-based search-and-replace to make sure you're changing all -- and only -- what you need. Here our Java and Smalltalk friends are ahead with all the refactoring bells and whistles that come with integrated environments these days. Slime, the preferred environment for Lisp programming in GNU Emacs, doesn't even have a notion of all the files in a system. It does do a pretty good job of tracking the home package of symbols in a Lisp source file, based on the in-package forms in the file. It would be a cool hack to write a rename-symbol-in-system elisp function that visits all the files in an ASDF system, searches for a symbol and renames it if it's the symbol we care about i.e., in the right package. I call on my minions to make it so!
Posted by Tim Moore at 1:08 PM 4 comments:

Once I had a Common Lisp / OpenGL interface working in glouton, I of course wanted to render the classic computer graphics model, the Utah Teapot. Glut has a glutSolidTeapot function, so I slavishly translated the C code from Mesa, which defines a big array of Bezier surfaces and uses OpenGL evaluator functions to render them, into Lisp and let 'er rip. 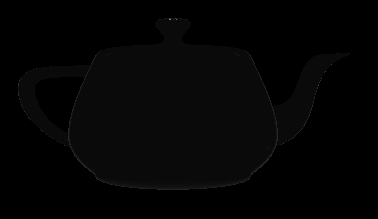 And got this interesting image. You can make out the murky outline of teapot if you squint hard. What's going wrong? With new teapot code, a new foreign function interface for the OpenGL bindings, running in Lisp, rather a lot could be going wrong. And I spent an embarrassingly long time chasing down various blind alleys until I did what I should have done first: read the man page for glutSolidTeapot (in my defense, I was on vacation without a broad-band connection, so googling wasn't my first instinct). Hey look, there's a big "Bugs" section!.

It turns out that we're looking at the inside surfaces of the teapot. Because their surface normals point away from the light source behind the viewer's head they are very dark. But those surfaces are supposed to be culled, and furthermore, the front surfaces of the teapot should not be! OpenGL can use the order of a polygon's vertices to decide if a polygon is facing away from the eye point and can be discarded. By default the order is assumed to be counterclockwise. If we turn off back-face culling we get a normal image, but that's not a happy state of affairs. In order to display the Glut teapot, according to the man page, you must change the vertex order to clockwise with (glFrontFace GL_CW) and then everything's happy. Fair enough, but why?

There's an unfortunate interaction between the OpenGL functions for evaluating Bezier meshes and the "quad strip" primitives that they use to display the approximation of the mesh on the screen. The quad strip looks like this:

That is, the vertices v0, v1, v2, v3, v4, ... are fed to OpenGL using glVertexf and the quads are drawn using the vertex order given by the arrow, which in this image is counterclockwise, making these quads front-facing. Now, the mesh produced by OpenGL for a Bezier surface might look like this (sorry for the lame diagram!): 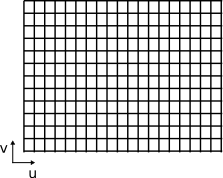 u and v are the parameters of the mesh and increase in the directions of the arrows. The glEvalMesh2 function proceeds in the u direction of the mesh creating quad strips. That is, if we start at u = 0 v = 0 (do I need MathML here?), then the first few coordinates of the first quad strip will be (0,0), (0,dv),(du,0),(du, dv),(2du,0),(2du,dv),... and then another strip will be started at (0,dv). But look again at the diagram of quad strips above; this vertex order produces quads that are facing away from the viewer! We can't reorder the points and put the origin of the mesh parameters at another corner of the mesh because the same thing can happen. We could try to swap u and v, but that causes another, worse problem: we're relying on the evaluator to generate surface normals for us, and the normal direction is defined by the cross product of du and dv on the mesh. The right-hand rule rules here; if we swap u and v, the normals will point away from us, which is also not good. Are we doomed to live with this cheesy clockwise order?

Well, no. Actually we don't have to evaluate the mesh from 0 to 1 in u in v: the glMap2f function takes arguments for the start and end values of u and v. If we evaluate v from 1 to 0:

then the vertices in the quad strips define quads with the proper orientation: 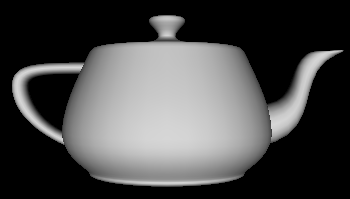